We are a collective that works on a voluntary basis (despite putting many many hours into these projects) and we are incurring in fundamental expenses to keep running our activities: livestream services, web services, animations, video editing, and so on. We are also looking for funding elsewhere, but especially in these troubled times, finding funds for our projects is an increasingly difficult task. There is not better way to keep funding our activities by being helped by many small donations of our supportive comrades. To make degrowth hegemonic, we need the people-power of each one of us! Please help how you can 🙂

This 6th to 13th of September, grassroots movements from across the world are meeting in Iceland to discuss new strategies and build a movement for worldwide democratic confederalism. 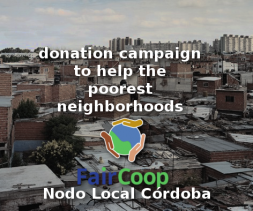 This is the first campaign proposed by Dan Córdoba from the Local Node Córdoba for the development of an economy based on the improvement of human relations and cooperativism in Córdoba, Argentinaa INTRODUCTION The development of services…

Faircoin will be the currency of the ‘II Mostra do Posible’ meeting
As a Local Node, we have the opportunity to teach the Faircoop ecosistem and tools to the different social organizations.
We ask for donations in faircoin currency to pay part of the meeting, and euros to be able to ensure faircoin & euro exchange.
It will be in Cangas do Morrazo (Galicia), on October 6th and 7th, 2018.

At the 2017 meeting , 52 entities participated. We can put faircoins in circulation!.

When talking about our story, first of all, we want to emphasize that one day, hopefully soon, this will really become OUR story. A story of all included, anyone who wants to participate, a story of a community that builds it’s own part of a creative and self-sustainable space, a story of no one left aside.

On the Greek island of Samos, we set up the pilot facility to reclaim, upcycle and creatively reuse tons of cardboard that are wasted every day here.

We have approximately half of the equipment needed to do it. But we need your help to get the other half, to start activity and to go through first three months, until we become financially sustainable.

Gardenarium is a documentary film project with the focus on practice of growing food and gardening in cities as a future necessity, as well as a healthy socioeconomic alternative. The film will question the links between food production and climate change and social and economic equality, and also rural-urban relations and cooperation.