Paral·lel 55: Last show of the company Puppets from Below

By Theater Company Puppet from Below

All pledges will be collected automatically until 18/12/2018.

What if a group of blackjack puppets went on strike before the show? The tears of the children would flood the theatre, enraged parents would claim the refund of the ticket cost and a millionaire compensation for ruining their plans for Saturday afternoon? And the puppeteers…

What would the puppeteers do? Would they assume the puppets claims, accepting this criminal bunch blackmail or, on the contrary, would they take reprisals against them? first thing would be to seize the blackjacks in case something might happen. But it is well known that puppeteers are rather unprincipled and could adopt other more sinister measures against the puppets: pull out their soft colored wool hair and put some dirty and rough scrubber in its place, use an indelible marker to paint Dali style whiskers on them or even kept them packed for years inside a top security suitcase!

WHAT IS OUR IDEA

We thought up Paral·lel 55 as a theatre play for puppets and actors where, together with a reflection on the validity of the strike as a working class tool for struggle, we make a reminder of the historical events related to the strike at La Canadiense.

The drama is built on two stories narrated in parallel: the events of La Canadiense strike in 1919 and a fictitious puppet strike in 2019. We saw this as a necessary resource to confront the evident contradictions between an experience of historical significance for the working movement and the

To take this project to a scene we have to do a double investigation:

-Historical: about the events in the 1919 strike

-Sociological: about the loss of worker rights and the worrying ignorance about the subject on the part of the working class, about union repression and the increasing propaganda carried out by mainstream media to pass the idea that striking is a useless and illegitimate tool.

We view this project as a scenic proposal that would allow us to refill the meaning for the idea of the strike as it was through History: the best tool for the working class to defend its rights. Historical memory helps us to better explain present time and, here, to dismantle the last years propaganda made in an effort to illegitimate and criminalize strikes.

We are aware that Paral·lel 55 is an ambitious and complex project and the challenge motivates us. So that the final result is up to our expectations, we will have partners from the theater field to advise us on a scenic level, elaborate the dramatic text or take on tasks such as costumes, the elaboration of the soundtrack …

WHY A PLAY ON LA CANADIENSE?

In a society where labor strikes and worker vindications are perceived as practices from the remote past and where the new generations question “What a strike is?” or “Can I strike myself also?” a few puppets will find out the answers to these questions, remembering at the same time a most relevant historical event, the strike at La Canadiense.

On February the 5th, 1919, the labor strike known as La Canadiense arouse at the Electricity Company Riegos y Fuerzas del Ebro in Barcelona. The bosses and institutions were forced to accept the workers demands after 44 days of mobilization, thousands of workers imprisoned at the Montjuic Castle and when a 70% of the Catalonian industry joined the strike. They won salary improvements, reinstatement of the dismissed workers, the 8 hour working day and the release of the workers that had been imprisoned during the strike.

La Canadiense was a most prominent historical event that achieved important labor gains, the ones that we still enjoy today but that are threaten: “Eight hours to work, eight hours to live, eight hours to sleep” was the slogan around which these vindications articulated and that obtained the legal enactment of the eight hour working day still in force today. Despite it all, this is a little known episode of our History such as it happens with the for the most part unknown worker rights.

Next year will be the centenary of the strike and this brings us the need to make it known at the same time that our puppets clarify their doubts and find out the strike is an efficient tool for struggle.

The estimates presented in this document is the optimal one to ensure decent working conditions for theater company members and peers. In the case of not reaching the expected amount, we will reorganize the budget items in a way that allows us to move the project forward. 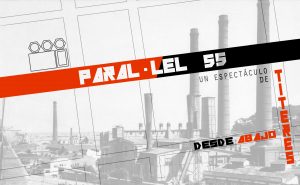 TÍTERES DESDE ABAJO (Puppets from Below)

Títeres desde Abajo was set up in 2012 in Granada for the purpose of recovering Puppet Theatre as a form of popular culture and to deepen in the knowledge of this type of language. Presently, we consider the company as a collective where everyone is implied in the way he or she feels is best, either with work or specific knowledge or with our own belongings…

The company aims to bring Puppet Theatre closer to new audiences and circuits. Throughout these years we have traveled the entire Spanish state playing at different social and struggle spaces, mostly at town squares, independent festivals, libertarian days, self-managed theatre halls and social centres. In these journeys we have collaborated with several projects such as the Adarga and AK-60 magazines, the “Operación Paranoia” comic or the “Gobierno del Miedo” documentary. In 2018, Títeres desde Abajo organized, together with the Company A Tiro Hecho, the First Granada Meeting for Political Theatre at the CSOA (Occupied Social Centre) La Redonda, in September of the same year they collaborate in the meeting of Political Art of Alcoi organized by “A tiro Hecho” and “La internacional teatro”.

Our first staging was Una casa es una ruina (A house is ruin), a proposal for all ages that brings us an emergency topic: family evictions. In our second major show, En la plaza de mi pueblo (At my hometown square), we made a reflection on the different forms that popular culture takes these days. Our next play and the most widely known, La Bruja y Don Cristóbal (The Witch and Dom Cristobal), is a blackjack puppets play where we show and denounce the political system structural violence. For the last two years, apart from playing these shows, we created Cristobitas, a short stories compilation, some of them of our own creation and others from different authors, the texts of Javier Villafañe or Roberto Espina among others. To these stagings we also must add other creations in minor format such as Hipocausto, Lidia del General Mola, or our last play, Ni Pío, which premiere took place last June in La Modelo former prison.

In 2018 he completed the Stage Management Course at the Andalusia Public School for Culture Training. As the end-of-course work, he is director of a mask theatre and art comedy adaptation of DarioFo’s play, Pum Pum, who’s it? The police.

In 2000, Raúl founded, together with other colleagues from Madrid, the Griot Theatre Group where he collaborated until 2011. Throughout these nearly 12 years he participated as an actor in more than 15 theatre productions and began his work as author of several texts, some of which were brought to scene. He trained as a Technician of Audio-visual and Entertainment Realization, Sound Technician and Scenery and Stage Machinery Building Technician.

In 2006 he began working as a puppeteer creating a repertoire for children entertainment. Starting in 2008 and until 2012 he collaborated as a puppeteer, actor and narrator with other companies such as the Finiquito Theatre Group (Guadalajara, Mexico), DuendEduca, Foro Casablanca Theatre Group and also with the narrator Gahdiel Andrade.

In 2012 he created the Títeres desde Abajo with the aim to continue working as a puppeteer and, at the same time, make a research on new drama formulas and on techniques relating puppets. Since February 2015 Raúl lives in Barcelona where he soon started his participation at the Pepe Otal’s Puppets House-Workshop where he got training in new techniques for puppets construction. In 2017, and in order to complete his training, he started studies on Show Applied Sculpture at the Barcelona Llotja School.

Basque anthropologist and playwright based in Barcelona, in his experience as drama writer, Mikel has harvested some significant awards in the Basque scene such as the Tartean Teatroa Award for Un pequeño paso para el hombre in 2015, the Alex Angulo Award and the Audience at Pavillion 6 Award for Brief Theatre for his Amor Breve, 2015, and the San Sebastián Pocket Theatre Award for Erbeste (2016). He got a scholarship at the “New Dramaturgy Programme” awarded by the San Sebastian City Council for the writing of Ecos (2017) and the “Montserrat Roig” scholarship by the Barcelona City Council for him to write Esto no es un Banksy in 2018.

Presently there are a number of his scripts being played in the Basque Country: Zarura Eroria (Anodino Teatroa, 2015), the above mentioned Erbeste (Anodino Teatroa) and the brief-theatre plays La Gamba feliz in 2017 and the Schrödinger Cat (Alex AnguloAward 2018). Some months ago he had the premiere in Barcelona of En Alquiler –Company Porta4, 2018, a theatre play about the tenant strike in Buenos Aires, 1907.

He started as an amateur actor at the age of three and, since then, he never stopped working at theatres: on stage as an actor and puppeteer and, behind scenes, as a playwright, scene director and lighting and sound technician. In 1996 he entered the puppet world after a course with Marta Alemany and the next year he began to make part of the Herta Frankel Puppet Company where he continues working at present at the Tibidabo Amusement Park. Throughout these years, he collaborated with different puppet companies as a builder, manipulator and director: Jordi Bertràn, Més “tumacat”, La Txumaneia, La Laia among others.

Degree in Dramatic Arts and Graduated in Spanish Dance and Contemporary Dance. In 2011, she founded the company “A Tiro Hecho” and she is director and actress in the play No te salves, Homenaje a Mario Benedetti (Don’t save, hommage to Mario Benedetti) In 2012 she was director of her second play Ladran, luego cabalgamos (They bark, therefore we ride) which was chosen by the 2013 Red de Teatro Alternativo .In 2014 she is director and actress in Donde las papas queman (Where potatoes burn), the play about Victor Jara. In 2015 she plays and directs, together with Maite Bacete, El mercado es más libre que tu (Market is freer than you are) within the Espacio Inestable Residences project. This play is a criticism towards the neo liberal system and its departing point is to denounce the TTIP. In 2016 she directs her first co-production together with Teatro del Barrio, from Madrid; La sección, mujeres en el fascismo español (The Section, women in Spanish fascism). In 2017 she directs and plays Les solidàries within the frame of the Graneros de Creación de la Sala Inestable.

No backers yet for this language. Be the first!